Gilligan's Island: The Complete Series Collection (Repackage),This show could have easily been forgotten but now it's impossible because of the great cast this show had. Gilligan (Bob Denver) and the Skipper (Alan Hale Jr.) were terrific at slap stick comedy. And then there are the sophisticated millionaires Thurston Howell the third (Jim Backus) and his wife "Lovey", (Natalie Schafer) and there also is the movie star Ginger. (Tina Louise) And for some strange reason Russell Johnson (the Professor) and Dawn Wells (Mary Ann) aren't credited in the first season but they have just as big a role as any other character. So as you can see there's something for everyone in this show, and the cast all did an extraordinary job at making their characters so beloved.

1.)From 1964-1967,TV audiences were hooked on "Gilligan's Island"-The series revolved around seven castaways who were marooned on a Hawaiian island after a touring vessel was involved in a dangerous storm-The Skipper (Alan Hale Jr) & his first mate Gllligan (Bob Denver) were the ones who operated the S.S.Minnow-Along for the fun were a well to do couple,Thurston & Lovey Howell (played to perfection by Jim Backus & Natalie Schafer),a science teacher known as The Professor (the late Russell Johnson),a redheaded,sexy actress Ginger Grant (Tina Louise) & a Kansas farm girl,Mary Ann Summers,(Dawn Wells)-Of course,this show was never a contender for an Emmy Award,but you already knew that-Fifty years later,"Gilligan's Island" remains a bonafide guilty pleasure.

2.)Growing up with Gilligan on tv brings a fondness of the show I'll always have. I thought I was being silly by buying the series, but it turned out when I put the first disc in that I enjoyed it much more than I expected. All three seasons are here; the first in b&w, the rest in vivid color. I finally know what the one line in the theme song is! "It's an uphill climb." I never understood those words before. It's still funny, and it feels good to see all of the cast members now that most of them have passed on to that big island in the sky. 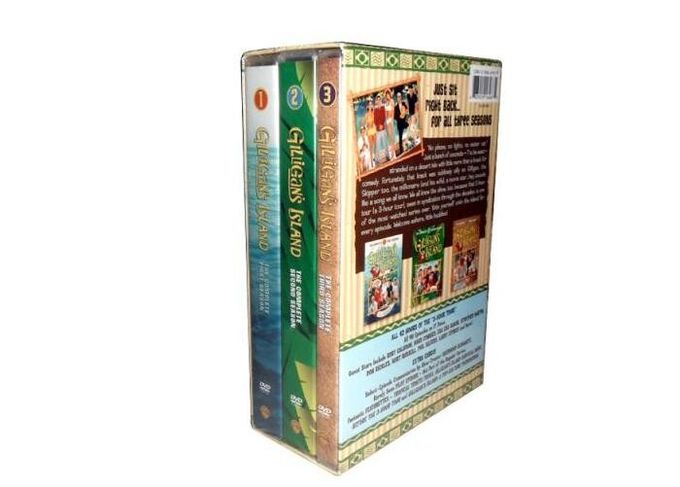