The story of "Cinderella" follows the fortunes of young Ella (Lily James) whose merchant father remarries following the death of her mother. Eager to support her loving father, Ella welcomes her new stepmother (Cate Blanchett) and her daughters Anastasia (Holliday Grainger) and Drisella (Sophie McShera) into the family home. But, when Ella's father unexpectedly passes away, she finds herself at the mercy of a jealous and cruel new family. Finally relegated to nothing more than a servant girl covered in ashes, and spitefully renamed Cinderella, Ella could easily begin to lose hope. Yet, despite the cruelty inflicted upon her, Ella is determined to honor her mother's dying words and to "have courage and be kind." She will not give in to despair nor despise those who mistreat her. And then there is the dashing stranger she meets in the woods. Unaware that he is really a prince, not merely an apprentice at the Palace, Ella finally feels she has met a kindred soul. It appears her fortunes may be about to change when the Palace sends out an open invitation for all maidens to attend a ball, raising Ella's hopes of once again encountering the charming Kit (Richard Madden). Alas, her stepmother forbids her to attend and callously rips apart her dress. But, as in all good fairy tales, help is at hand, and a kindly beggar woman (Helena Bonham Carter) steps forward and -- armed with a pumpkin and a few mice -- changes Cinderella's life forever.Rated PG for mild thematic elements.

1.)Kenneth Branagh's latest adaptation of the classic fairy tale is a sweeping, lavish and beautiful production. Unlike so many of the fairy tale themed movies of the last few years, this version of "Cinderella" is a straightforward, traditional retelling. It takes itself seriously. It's also a breath of fresh air for that very reason. Instead of fluffing the story with unnecessary forced plot lines,complicated back stories, villians that are are just misunderstood (boring)... Branagh's "Cinderella" is the story everyone knows, and it is told exceptionally well. This is a superb film for families and people of all ages. I can't imagine any boy, girl, man or woman NOT finding something enchanting about it.
Lily James is perfect as Cinderella, bringing a sweetness and innocence to the character that is at once sympathetic, and yet always bold and determined. Cate Blanchett is equally wonderful as Lady Tremaine, every bit as mean and vile as a Disney villain should be, while clearly hiding some pain of her own . I don't even know where to begin with the production and costume design...it is breathtaking. Someone in some department will likely be taking home an Oscar next year. The soundtrack by Patrick Doyle is very beautiful, as well. It is difficult not to get at least a few butterflies when the music swells and Cinderella's dress turns to a ravishing gown.
I have to say, I didn't expect this to be as good as it is. I really didn't. I've found most of Disney's work these last few years to be extremely underwhelming (including Frozen and Into the Woods). This changes everything! I think it's important to note that the film never gives the impression that Cinderella just needed a prince to be happy. It's made clear that what she needed was to be allowed to .

2.)Cinderella has always been my favorite fairy tale. I saw this film in the movie theater.

I have to admit I enjoyed it more watching on the DVD.

Lily James is absolutely lovely as our heroine. I can see why so many people questioned the size of Lily James's waist in the ball gown. Lily has beautiful chemistry with Richard Madden as our prince. He is handsome, charming, etc . . . and they meet beforehand in the woods foreshadowing the reveal of the ball.

Derek Jacobi is loving as the king and Helena Bonham Carter is the most fun as the ditzy fairy godmother.

The stepsisters are malicious but in a half baked way and didn't make much of an impression.

The most intense and focused character is Cate Blanchett as the stepmother. In the commercials for the film, I thought she was an unusual choice. I guess I have not seen enough movies with her as the evil character.

3.)WOW, this film is just STUNNING! I loved it. It's STILL a great Cinderella story but on steroids! The cinematography is OUTSTANDING and all the actors are FABULOUS, especially Kate Blanchett, who plays wicked so spectacularly and Lily James is fantastic as Cinderella AND Helena Bonham Carter is UNBELIEVABLE as the Fairy Godmother, and so funny too! She is HILARIOUS!!! It's the same beautiful story, but just done so much more beautifully. I LOVE this latest version. I HIGHLY recommend this film. You WON'T be sorry! 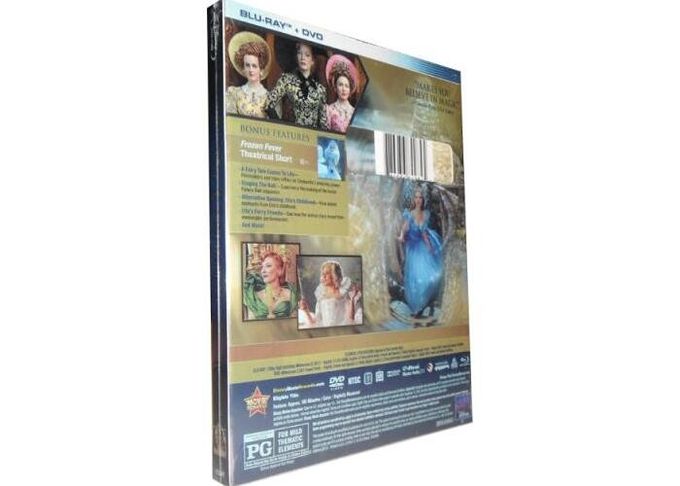